👍
From HifiWiki
Jump to: navigation, search

NORDMENDE, exactly Norddeutsche Mende Rundfunk KG (production) and NORDMENDE Vertriebs-GmbH & Co. OHG (sales), was an independent manufacturer of consumer electronics from 1947 to 1977. Its predecessor was Radio H. Mende & Co. of Dresden, founded in 1923 by Otto Hermann Mende (1885-1940). In 1937, every third radio set manufactured in Germany came from Radio Mende. In addition to radios, transmitters, teleprinters, field telephones and amplifiers were also part of the production program. During the war years, production was switched to armaments such as radios or bomb fuses. From 1978 onwards, NORDMENDE - along with SABA and Telefunken - was part of the Thomson Brandt Group.

Founded in 1947 with 18 employees in the bombed-out factory halls of the Focke-Wulf aircraft works in Bremen-Hemelingen, the company quickly grew into one of the most important consumer electronics companies. In the middle of the 50s the first move to larger production halls in Hemelingen (to Dietrich-Wilkens-Straße) took place. On July 3, 1957, the company moved into the new 12,000 m² television factory, which was the most modern factory for television sets in Europe at the time. The number of employees was approx. 2,500 (for comparison: SABA approx. 1,600 employees incl. telephone construction, Grundig approx. 8,600 incl. tape production and studio technology as well as office technology (Triumph-Adler)). Due to the increasing demand, the company grew and opened branch factories in Northern Germany: Wildeshausen (1964), Bremerhaven (1969), Sittensen (1970) and Verden (1972). NORDMENDE was considered innovative and a market leader in technology. For example, the first television with wireless ultrasonic remote control came from NORDMENDE in 1961.

Another line of business, in addition to consumer electronics, was the development and construction of measuring instruments. This division operated under the name "Electronic Measuring and Testing Equipment - Industrial Electronics" and, in addition to common electrical measuring instruments, was also a manufacturer of, for example, gas warning devices. However, in contrast to the standard devices, signal transmitters and oscilloscopes, no success could be achieved on the market with the special measuring devices.

The company was sold to the Thomson Brandt Group in 1977. The brand name NORDMENDE was gradually replaced by Thomson in the 90s and finally disappeared from the market altogether.

Since 2007, the Indian consumer electronics group Videocon has again been marketing devices under the brand name NORDMENDE. The latter had acquired the corresponding trademark rights.

On April 5, 2017, the company TechniSat announced that it had acquired the license to use the NORDMENDE brand for Germany, Austria, Switzerland and Poland from the brand owner Technicolor S.A..

From the house magazine: 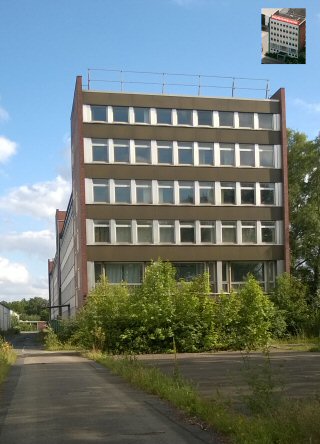 Plant view from old catalogue. The halls are currently used by Daimler AG

The frame where the neon sign once perched can still be seen on the roof.